Muhammad was born in the Arabian city-state of Mecca in 570 CE. He was orphaned in childhood and raised by his paternal uncle. Though of noble lineage (and descended from Abraham through Ishmael), he lived a quiet, middle-class life.

Even before prophethood, Muhammad was renowned for his impeccable honesty and outstanding morals. He was called Saadiq (the honest) and Ameen (the trustworthy). People would even leave their goods with him for safe-keeping.

The prophetic era of Muhammad’s life began with the revelation of the Qur’an, communicated to him by the Angel Gabriel in the year 610 CE. This was the same Gabriel who had visited other Prophets. Being the actual words of God and a Message to humanity from the Divine Being, the Qur’an was recited verbatim by the Prophet to the people as it was revealed over the course of 23 years. Considered nothing short of a miracle for its message, guidance, linguistic eloquence and even healing benefits; the Qur’an, along with the wisdom Muhammad himself imparted (called the Sunnah), constitute Islam. 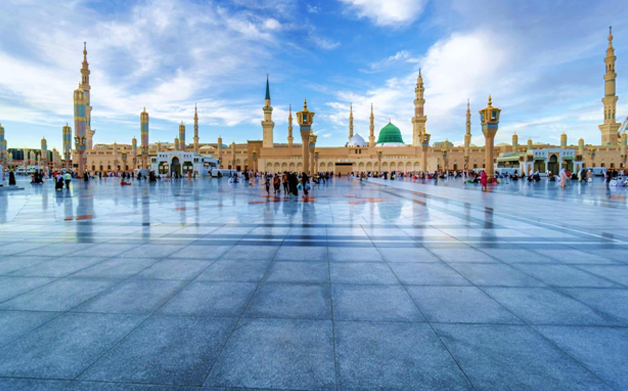 The blessed city of Medina, where the Prophet introduced the first constitution in human history.

Muhammad was the last in a line of many Prophets commissioned by God for calling their people to worship the Creator alone and to follow divine guidance for success in this life and the next. But as the last in this line, when the world was about to begin the process of internationalization, Muhammad was a Prophet for all mankind: his message for all nations, his miracle (the Qur’an) for all eras.

In fact this internationalizing process began because of Islam. It was the Muslims who created the first and perhaps only true global community.

But the Meccan elite saw Islam as a threat to their traditions and power. They persecuted the fledgling Muslim community with torture, murder and banishment. Many died due to the hardship, including the Prophet’s beloved wife, Khadijah. However, another city-state, Madinah, then amazingly converted to Islam en masse and made the Prophet Muhammad their leader.

While some Arabian tribes also converted to Islam during this period, others declared war on Madinah. Yet the Muslims defeated all opponents in battle—with almost miraculous efficacy—till, by the time of the Prophet’s death, all of Arabia had come under Islam.

By 632 CE, during the Hajj (pilgrimage to Mecca), the Prophet said that his mission and life were nearing their end. He therefore delivered a farewell sermon and upon returning to Madinah suddenly became ill and died before year’s end.

Despite the unprecedented achievements of his career as a leader, the Prophet lived an extremely humble life. His wife, Aisha said, he would be “cleaning and mending his own garment, milking the goat, mending his shoes, serving himself…”1 and that “At our home, fire would not be kindled (sometimes) for a whole month; we subsisted merely on water and dates.”2 The Prophet died owning almost nothing.

Muhammad not only conveyed God’s words (i.e. the Qur’an) to mankind but served as an interpreter and ideal of how they were to be lived. Islam was a calling upon all humanity to worship only the Creator and follow His guidance—the same guidance God had revealed to other prophets throughout the world in other ages. Indeed letters and emissaries were sent by the Prophet Muhammad to distant lands conveying the message of Islam.

This message brought profound guidance for humanity with its spirituality, compassion and ethics. The Prophet said:

“Love for humanity what you love for yourself.”3

“May God have mercy on a man who is kind when he buys, when he sells, and when he makes a demand.”5

His Prophethood brought the first great legislation in human rights and even animal rights. Among his words about kindness to animals:

“Fear God in your treatment of these (animals) who cannot speak.”6

The Companions asked… “O God’s Messenger! Is there a reward for us in serving animals?”He replied: “There is reward for serving any living being.”7

It even inspired modern European legal systems (via the Napoleonic Code).

“I have read…the sayings of the Prophet with much interest and profit. They are among the treasures of mankind…”10

Even the scientific method and many of the fundamentals of the science and technology we enjoy today originated in the Muslim world and can be traced back to the revolution in human thought Islam created. The Qur’an and Prophet Muhammad’s teachings encouraged mankind to think about the universe, seek knowledge, challenge age old myths, and use evidence in forming our ideas.

“…of all men, [he] has exercised the greatest influence upon the human race.” -William Draper (History of the Intellectual Development of Europe) 11

“He was the only man in history who was supremely successful on both the religious and secular level.”–Michael H. Hart (The 100: A Ranking of the Most Influential Persons in History)12

“As regards all standards by which human greatness may be measured, we may well ask, is there any man greater than he.” -Alphonse de Lamartine, (Famous French poet, politician and historian in Histoire de la Turquie)13